First run today was Enzo in Team Jumpers. He was flying but knocked two bars. Tooney went off course. There was a broad jump and you had to pull to the opposite end of the tunnel from the one they saw and she went right into the tunnel. Right after that we had to run over to Enzo’s quarterfinal run for Performance National Standard. I took it easy on this course and we got through clean so he should be in the semis no problem. He did tick two bars but they stayed up luckily. Next was snookers. I actually had about 15-20 minutes for a break this time. Enzo went off course into the tunnel right off the bat. Tooney went off course towards the end of the opening. Ergh. Not a great day for the team events but at least enzo got into the semifinals for PNS.

Tommorow we have the Semis for PNS and Performance Speed Jumping and Team Standard.

We’ll be leaving for Scottdale on Wednesday! At the AKC trial last weekend, Enzo kept going off course and missing contacts so today and tommorrow we’re doing a lot of practice running past tunnels and some contact work.

At Nationals, they set me up so that there are only 4 dogs between Enzo and Tooney in the team runs and even less is PSJ. I’ll have to take a crate to the ring with us. No way I’ll be able to make it back to the crating area. And to top it off on Friday I have all of my runs between 9:30 and 12!

We’re back and mostly recovered from our trip to Atlanta for the US Disc Dog National/International Finals. It was a long drive out but luckily the trip both ways was pretty uneventful.

Friday was a qualifier but since Enzo and Tooney were already qualified, they played for practice. Jeff and Enzo competed in Super Open. Their first freestyle routine on Friday was awesome with only 3 or 4 drops. Tooney had two awesome rounds of Toss and Fetch and tied for 5th on Friday in the Super Pro Division.

Saturday was the National finals for Super Open and they had to place in the top 15 to compete on Sunday for the International Finals. There were two rounds of freestyle and one round of Toss and Fetch. It was windy but Jeff handled the wind really well and Jeff and Enzo ended up placing 9th in the National finals for Super Open on Saturday so they made it into the International finals on Sunday! On Saturday Jeff and Enzo had better freestyle routines but a more average Toss &Fetch. On Sunday their routines were solid but not quite as good as Saturday but they rocked Toss & Fetch with a perfect score of 22.5! That’s the maximum score that you can get in that part of it. They ended up in 8th place in the International Finals which is quite awesome considering that we didn’t even know if they would make the cut for Sunday! 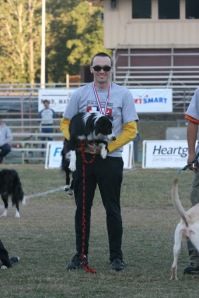 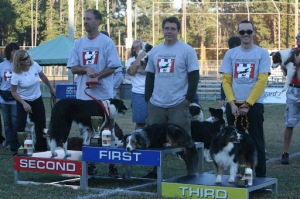 Here’s some great shots taken by my friend Kat Fahle! 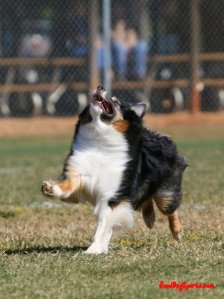 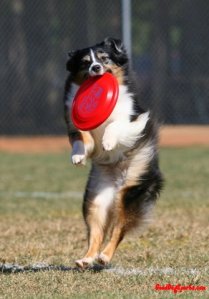 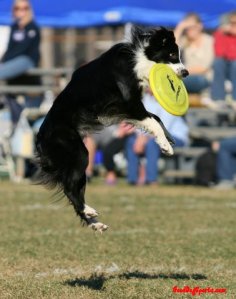 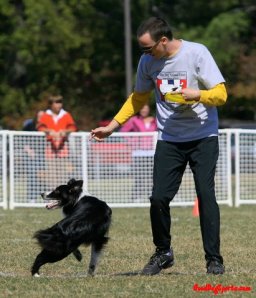 The other news of the weekend is that we decided to officially retire Sydney from Frisbee competitions. He is going to be 11 next month. His body is still in really good shape but his mental focus just isn’t there anymore. He keeps dropping the disc out at 40 yds and wandering off. Also, before you throw the disc he’s just impossible to keep in a stay which gets really frustrating. He has just become more and more difficult to deal with in a competition setting and it’s not that fun anymore for either him or us. So the last frisbee competition of the season is also the last of his career. Sydney had a good long run. It’s just too bad that he didn’t have a better foundation in his early training.

We went to Vegas for a 3 day weekend. Friday and Sunday was AKC agility and Saturday was a frisbee day, Las Vegas’s first UFO local.

The AKC trial was tiny, only around 50 excellent dogs. We drove out to Vegas on Friday morning since the trial didn’t start until 3pm. Enzo had a really nice standard run other than a couple wide turns because of my late front crosses. He ended up getting first place. Don’t know if it was the long drive or cold windy weather but Tooney was just bonkers. She ran behind me to take an off course jump and also missed both her aframe and dogwalk contacts. In JWW, Enzo ran first and had a nice run but knocked a bar so we didn’t get the double Q. Tooney did much better in this run but also knocked one bar. Oh and we went to eat at the Rio Seafood Buffet afterwards which is my fav at Vegas because of the all you can eat yummy lobsters!

Saturday was the disc dog competition and had the worst weather. The coldest and windiest day of the weekend. I ended up doing catch ratio so no pictures or video of the frisbee this time. They also did rotating judging where they split the competitors into two groups and each group judged the other so Jeff got his first taste of judging now. Of course he will have to judge a lot next year since our club has the top 3 competitors judge at that competition next year.

Jeff and Enzo did pretty good in freestyle considering the conditions with a catch ratio close to 60%. They had the highest freestyle score in their group and second highest overall. Toss and Fetch actually went pretty well for them. They got two catches for 7 points which was really good in that strong cross wind and ended up winning the competition! Oh and I ended up placing 2nd in intermediate with Enzo too! The competition finished up pretty early and we headed over to the Hoover Dam just to see it and take a couple pictures but we didn’t do the tours. The dam really isn’t as impressive as I thought it would be but that bridge that they are building for the Hoover Dam bypass is scary!

Sunday we went back to agility. Tooney was nuts again. She blew by the table in standard to take a jump and leapt over the dogwalk contact. I was pushing on her a little so I think she couldn’t take that pressure and leapt off the side. Enzo had another really nice clean run in standard and placed 1st again. In JWW Tooney went off course again. Enzo took a good hard look at the same off course tunnel but I was able to call him off of it. He had at least one more really wide turn but made it through the course clean so he got his second double Q!

Jeff took video of my runs but I probably won’t get a chance to upload them before we leave for Atlanta on Wednesday!

Ok Here are some of the videos:

A Good Frisbee and Agility Weekend! 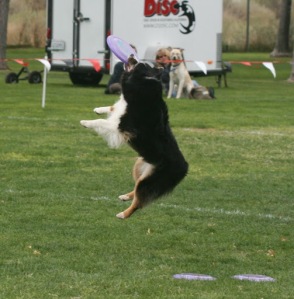 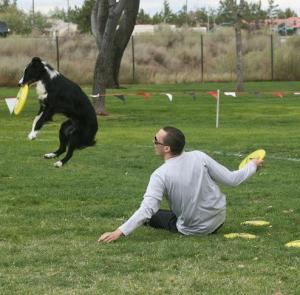 We went to a UFO local competition in Lancaster CA on Saturday. It was really windy, 20-30 mph, so not great conditions for frisbee but at least the rain held off. I had some good T&F rounds with both Tooney and Enzo. I’m throwing a lot better than before but still not that consistent. The Hero Xtra discs help a lot.
Jeff and Enzo had a great Freestyle round especially considering the wind. They had the highest scoring Freestyle routine but unfortunately Enzo only got 3 points with Jeff in T&F. They still did well enough in freestyle to place 3rd overall though!
Tooney and Jeff had fun in their rountine but Tooney didn’t catch that much. She did really well in T&F with him but missed the last throw which was a perfect throw. Tooney normally doesn’t miss like that but she might have been a little tired.

Today I went to an AKC trial. In standard Tooney missed her Aframe contact which almost never happens and Enzo had an awesome run. A couple slightly wide turns but he ended up with 3rd place and only 1.4 seconds behind Driven who won at AKC Nationals this year.

Jumpers had some tricky angles in it but both Tooney and Enzo ran clean. Tooney had a nice efficient run. Enzo’s run was a little on the edge. He was really fast and I ended up really late on a rear cross so he went really wide and came really close to running past the next jump. He also spun coming out of a tunnel near the end because I ran along the back side and couldn’t meet him at the end. We made it though. Enzo placed 4th and Tooney 5th. This seems to happen a lot! There were only a few tenths of a second between 2nd place and 5th place. Driven came in first and was a couple seconds ahead.

Most importantly, Enzo got his first double Q!!!! Maybe there is hope to get 5 more by the end of November…

Tooney turned 6 years old today! Hard to believe! Here’s a cool pic that my friend Marci’s husband Thomas took at Bay Team a few weeks ago. Plus some puppy pics from the archive! 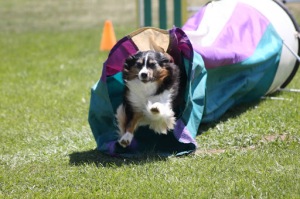 Tooney at 10 weeks old in the snow: 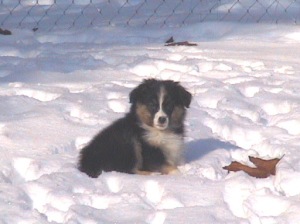 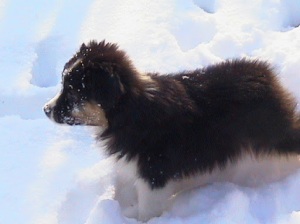 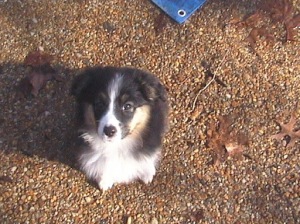 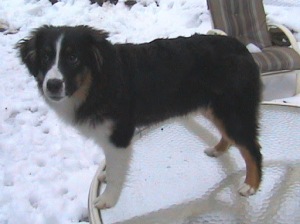 7 months old and getting groomed properly (which doesn’t really happen much!) 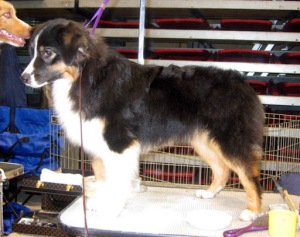 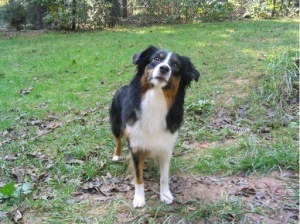 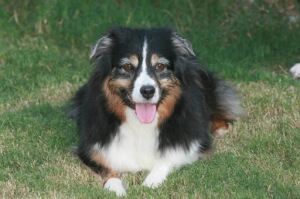