Here’s Tooney’s PVP Standard run. She missed the dogwalk contact and then almost took the number 9 jump instead of the number 8 jump but since it wasn’t a tunnel she called off of it and I was able to fix it. Enzo leapt his aframe contact again and because of that I couldn’t push him to the 14 jump and he ran past it and then backjumped it. I also think it probably would have been faster to wrap to the right instead of the left on jump 18.

Here’s Tooney and Enzo’s PSJ runs. I handled them a little differently. Normally I try to handle them the same. For Enzo I handled 4-6 as a serpentine and rear crossed 6. For Tooney, I left her in the weaves a little and front crossed between 4 and 5. Both ways worked fine. I didn’t think I’d be able to get far enough away from the weaves to get a timely front cross in for Enzo.

The other place I handled them differently was from the 12 tunnel to the weaves. For Enzo I pulled to the 13 jump and then rear crossed jump 15. The line from 13 to 15 on the actual course was a little straighter than on the map which was why I didn’t cross behind number 14. With Tooney I front crossed on the landing side of jump 13. That almost pushed her out to the off course jump. I didn’t want to handle that line with her the way that I did for Enzo because I was worried that the rear cross would pull her off the weave entrance. Enzo actually has better weave entrances than Tooney does, but is not as good with me leaving him laterally in the weaves.

The ending line I should have rear crossed number 18. I thought I could be even with them for the push but I wasn’t. I was a little bit worried that putting pressure on that jump would send them into the tunnel instead.

Tooney was clean but with the wide turns her time wasn’t nearly good enough to make the finals. She ended up 17th and they took 10. Enzo had another missed contact but with his wide turn before the aframe and the spin at the end, his time still would have been just out of the finals. His time would have put him in 13th if he didn’t miss the contact. 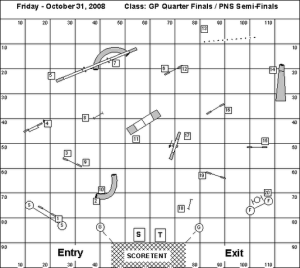 Enzo missed the aframe contact for sure and I think he may have missed the dogwalk too but didn’t get called. The refusal after the chute was my fault for not supporting the jump enough. I didn’t think about the fact that he would be blind coming out of the chute and I was worried about him going wide after that jump. Even with the refusal his time was only 0.02 seconds behind the last dog to make it into the finals so if we had been clean he could have gotten into the finals!

Tooney ended up going off course. After the number 6 jump she touched the aframe.

Here is Enzo’s Quarterfinal run for Performance National Standard. Pretty straightforward course. Hardest part was the turn from 15 to the dogwalk. On the actual course the number 19 jump was a lot more in their view so I rear crossed 15 and then front crossed after it which is not necessarily a move I’m super comfortable with but it worked out well. I just had to make sure that Enzo got his contacts so I was pretty stern with him to make sure he listened. Slowed him down a lot but at least it worked. Enzo ended up in 8th place. Tooney had a bye into the Semifinals so she didn’t run this course.