Disc Dog Empire (DDE) hosted their first competition as a club and it was a Discdogathon world championships qualifier that includes freestyle, bullseye, time trial, spot landing and pairs distance/accuracy. Yeah, 5 events in 1 day with a turnout that included close to 100 entries in certain events. DDE did a great job. The weather was beautiful in the mid 70’s and sunny.

Freestyle started for me with Slayte. He did a full freestyle routine and didn’t leave the field and only glanced off a couple of times. I mixed in tugging about every 20-30 seconds and finished with a roller. His focus was excellent. Not only that, he actually had a great routine and had 75% ratio. When I left the field I told Jenn that I don’t care about the rest of the day – little did I know what was to come! At the end of the day, this was clearly Jenn’s favorite moment. 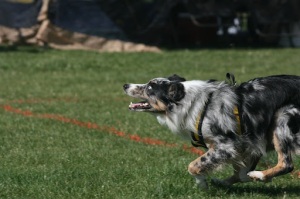 Tooney was next in freestyle and what an awesome routine she put out. 1 drop! I was hitting myself because again, almost a perfect routine except for 1 throw. I can’t even say I wish I had the throw back. It was just slightly low and she slowed up and didn’t make a good attempt. It is hard to catch 20 straight discs. 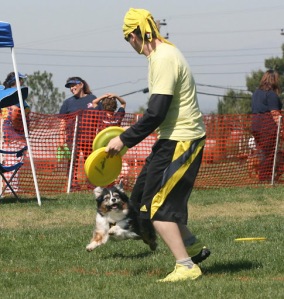 Enzo was last to go for us and I did a “first”. No routine!!! What? Yeah, normally I have a totally set routine for Enzo with every throw and motion choreographed. I just wanted to do something different. It paid off. Enzo had a perfect routine with 0 drops! I was so stoked. Enzo also won the event. Considering the big turnout, I was really impressed. I have been wanting to have a perfect routine for so long, I’m glad we managed to obtain that goal. It is very satisfying.

Bullseye was very good for Tooney and solid for Enzo. Slayte had his only lapse of the day when he ran up to another dog, but then continued the round.

For time trial, the wind was picking up but Jenn had the best time of our crew with a 23 seconds round by Slayte! It was one of the best of the day, but not sure exactly where he finished. Tooney also had a really good round with 29 seconds.

Pairs distance/accuracy is a toss and fetch event where 2 players alternate throws. I like it a lot. Jenn played with Karen and Bentley and had a nice round. I got to play with Ellie and Preston and we also had a good round. I played with Jerry and Dakota and were great with a 2nd place finish! Jenn and I had a really awesome round with Enzo and my last disc just floated out of bounds, but still was in the top 10. Tooney had a good round as did Slayte.

It then hit me after the event that I could have had 2 perfect routines in 1 day if it wasn’t for a single throw being off by about 2″ in height.

I’ll leave the post with a learning lesson. When photographing Enzo, be careful with the zoom. It’s easy for him to jump out of the frame. 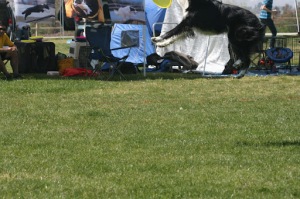 Posted on March 11, 2012, in Uncategorized. Bookmark the permalink. 2 Comments.